So I was looking for a nice chrome polish. On most forums people would be 'dude you should get yourself a bottle of 'Brasso' metal polish'. Now the problem was, I can't find Brasso metal polish anywhere so decided to go with an alternative.

Turtle Wax Chrome & Metal polish. I got to say, oh suprised I was.
Anyways my wheel cover is chrome, and was in a pretty bad shape. You can see how it looked like on the pictures. Small rusty spots, didnt look shiny at all and all sorts of gross sludge or I don't know. It probably never was polished since like 18 years which is also the age of my Van.

Anyways the instructions are pretty simple. Just get some cloth/whatever to get the polish on to the surface, put it on, let it work for a minute or two and wipe it off with clean (microfiber) cloth.
Ofcourse that's not how I used it.
I got it on a piece of paper towel and after putting it on started 'polishing' or rubbing the polish onto the surface in circular movements.

After a few turns the gray paste starts to wipe off, then you just take another clean paper towel and wipe it off completely. If you still see some spots, repeat, and at the end wipe dry with a microfiber cloth. Boy was I suprised. I made a little comparison pictures for you with some tape so you can compare the polished area and the 'non-polished' area. More pics below.

So my shock absorbers were in a pretty bad shape. They were dirty and probably they were still the factory installed shocks. The ride was pretty rough too so I thought maybe it's time to replace them. I had some new Monroe's Heavy Duty shocks lying around, and I had a day off, I got to work.

Ofcourse first you need to do is jack the front or back up, depending on which side you want to replace first. Always use jack stands to support the vehicle. Take the wheels off, and if it makes you feel more safe you should put the wheels on their side under the car (that's what I usually do).
With the shock absorbers exposed, get a wire brush to brush away all the dirt and rust off the bolts holding the shock together, and give it a nice batch in penetrating oil (or whatever you use for getting rusty bolts loose).
Now comes the most difficult part of the job - getting the bolts off - it took me about a half an hour to get only one loose.

On the picture you can see the upper and the lower bolt (yes I forgot to take a picture with the old one still on). Get them both off and you can simply take the shock absorber off. You can see a little comparison with the old one on the first picture. As I said the old ones were pretty bad, when I compressed them by hand they didn't even decompress but stayed in the same position.

The green plastic wrapping on the new shocks - don't cut it off if you haven't placed the new shock absorber in its place - they will start to decompress if you do and it will get more difficult to get them in the right spot.

Or  if you don't owe a torque wrench (just like me) which are really expensive - just get them really tight.

That's it, wheels back in place, lower the car and you can enjoy your new shocks!

(The pics are only about the rear suspension - didn't had the time to replace the front shock absorbers today!)
Gepost door Kristof op 13:22 Geen opmerkingen:

Welcome to the Club 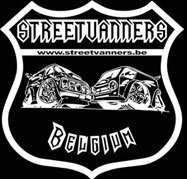 I stumbled on an American Van Owners club called the 'Streetvanners Belgium'. Actually I crossed them once or twice while I was searching for a van. After the purchase I had to make myself a member. I love the logo but the folks are also pretty nice and helpful. In May they (or better we) had an annual anniversary meeting. This one was the fifth anniversary of the club, which was meant to be quite big. There were about 20 USA vans, all Chevy's and GMC's. Holy crap I never saw so many nice, awesome-modded and renovated vans. The time schedule wan't very tight, so I had plenty of time to check most of 'em out. Friday began with a 'streetvannertje', which is a simple mix of white wine, whiskey (I think) and orange juice. Very nice, but tough on the head afterwards. Saturday night most member got dumped in the middle of the woods in the Belgian mountains (the Ardennes) and had to come back. At the end of the walk we had to cross a river on two ropes hanging over the water. Most of us fell in, some got thrown in even if they crossed (that's what happened in my case). Got to say, had an awesome weekend and I'm sure I'm gonna stay with the club for some long time. 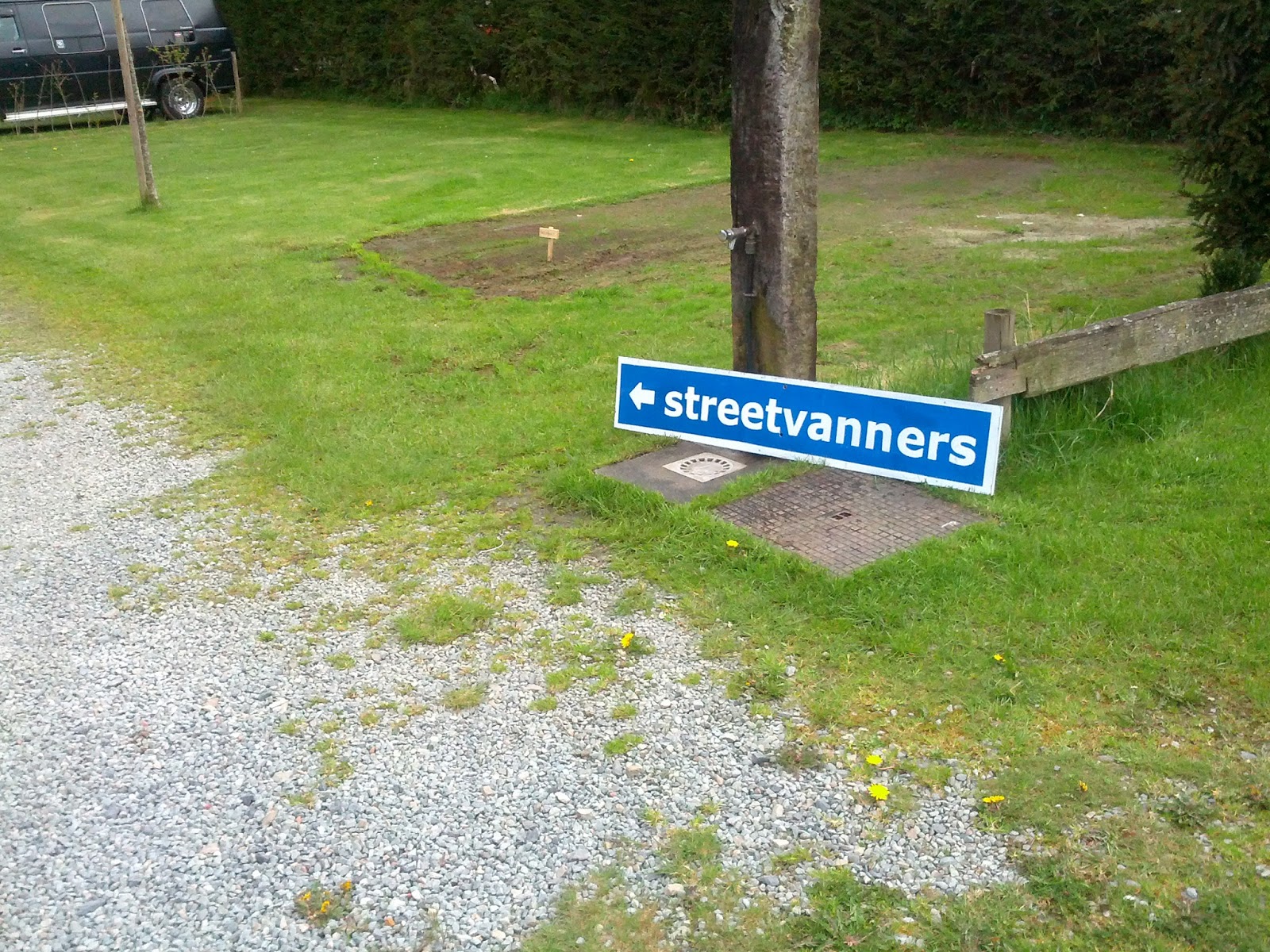 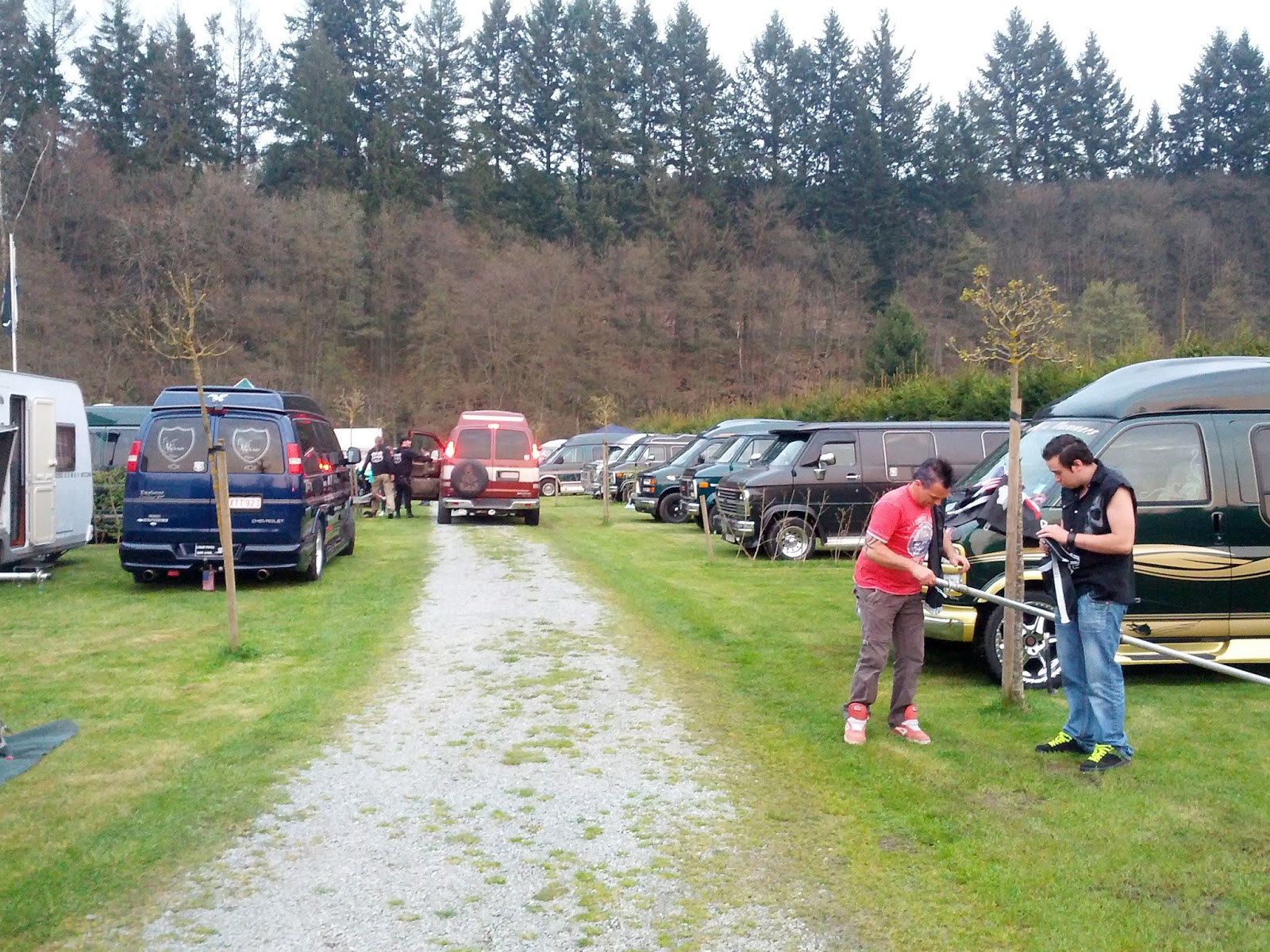 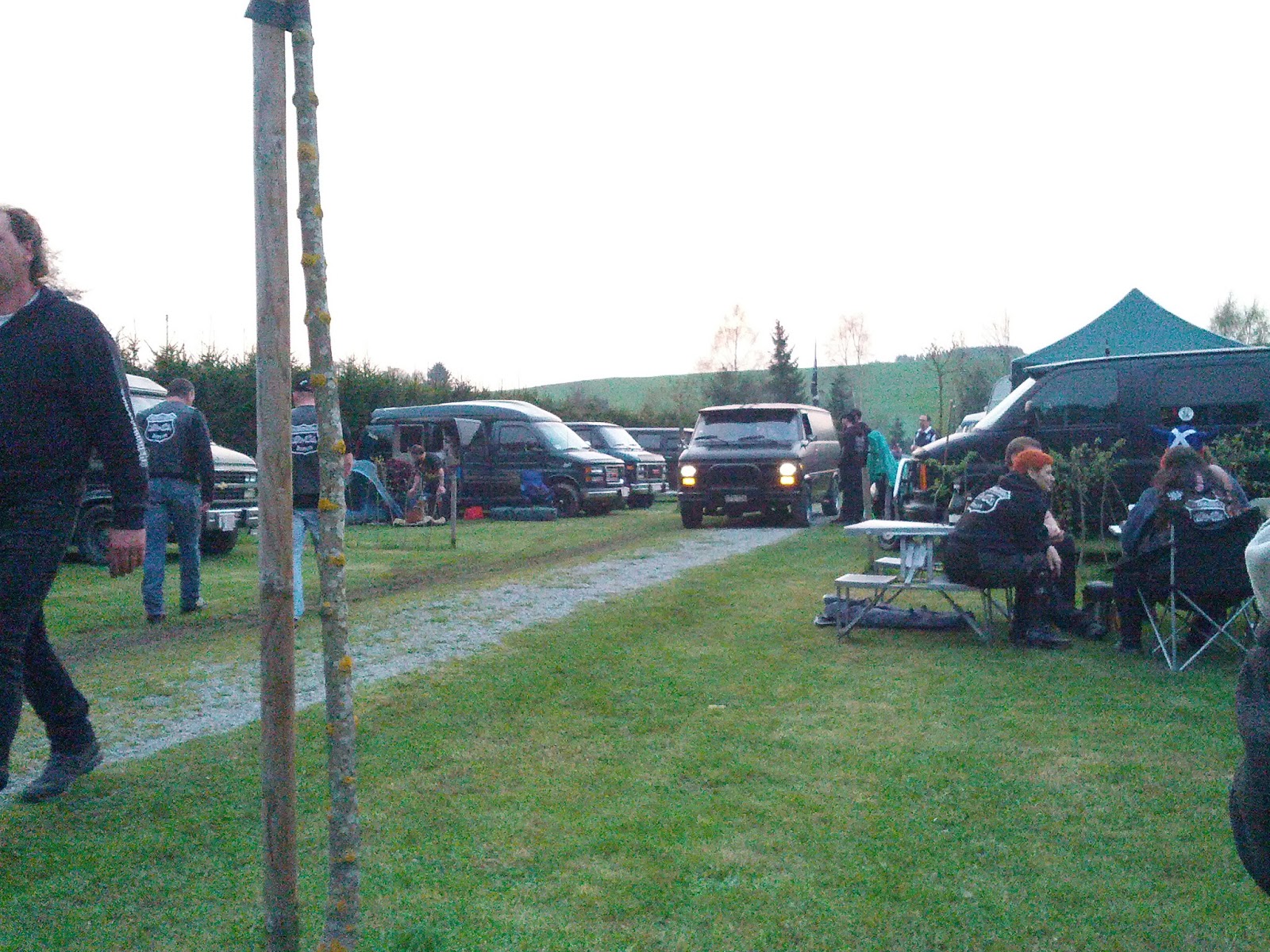 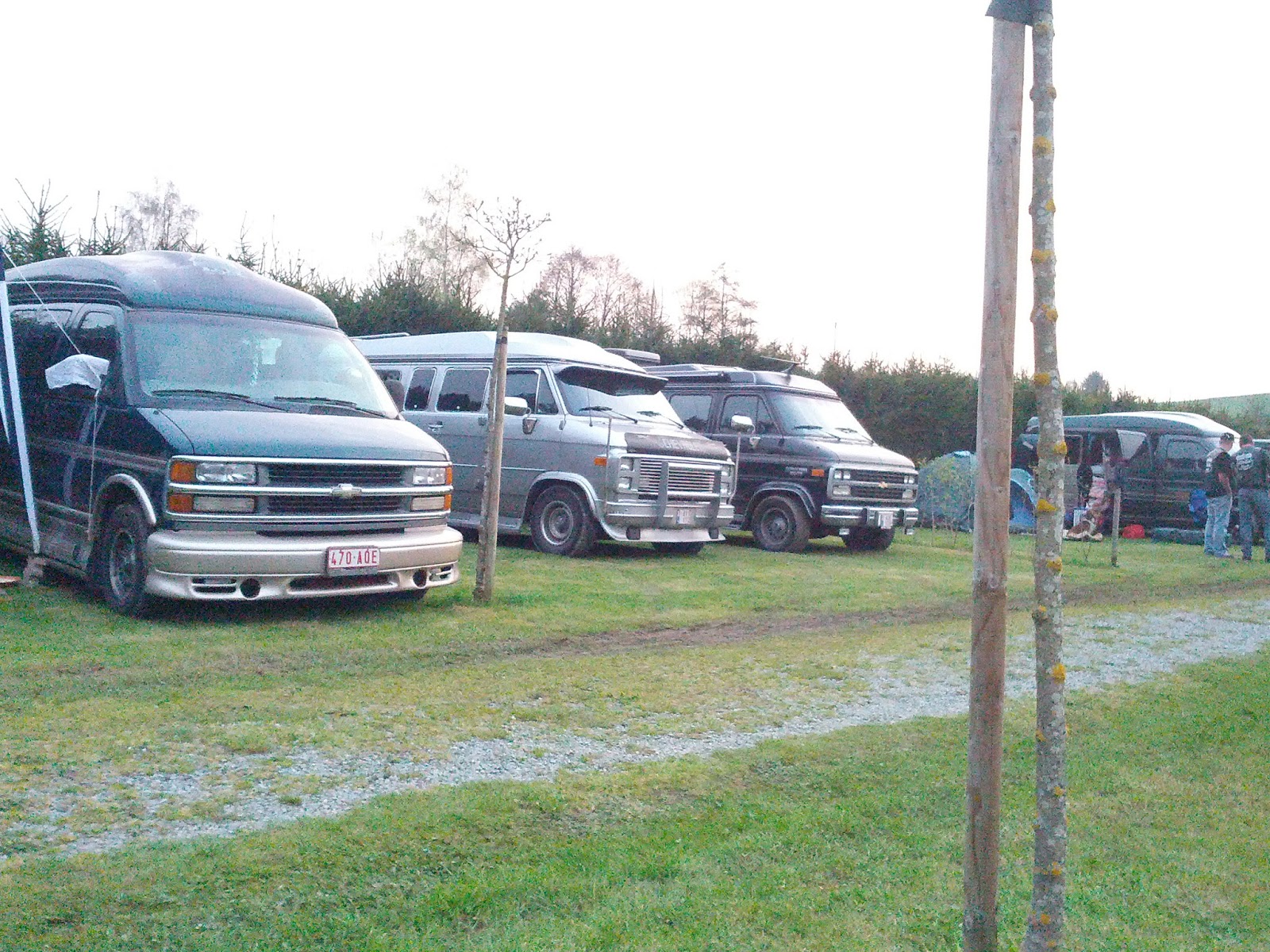 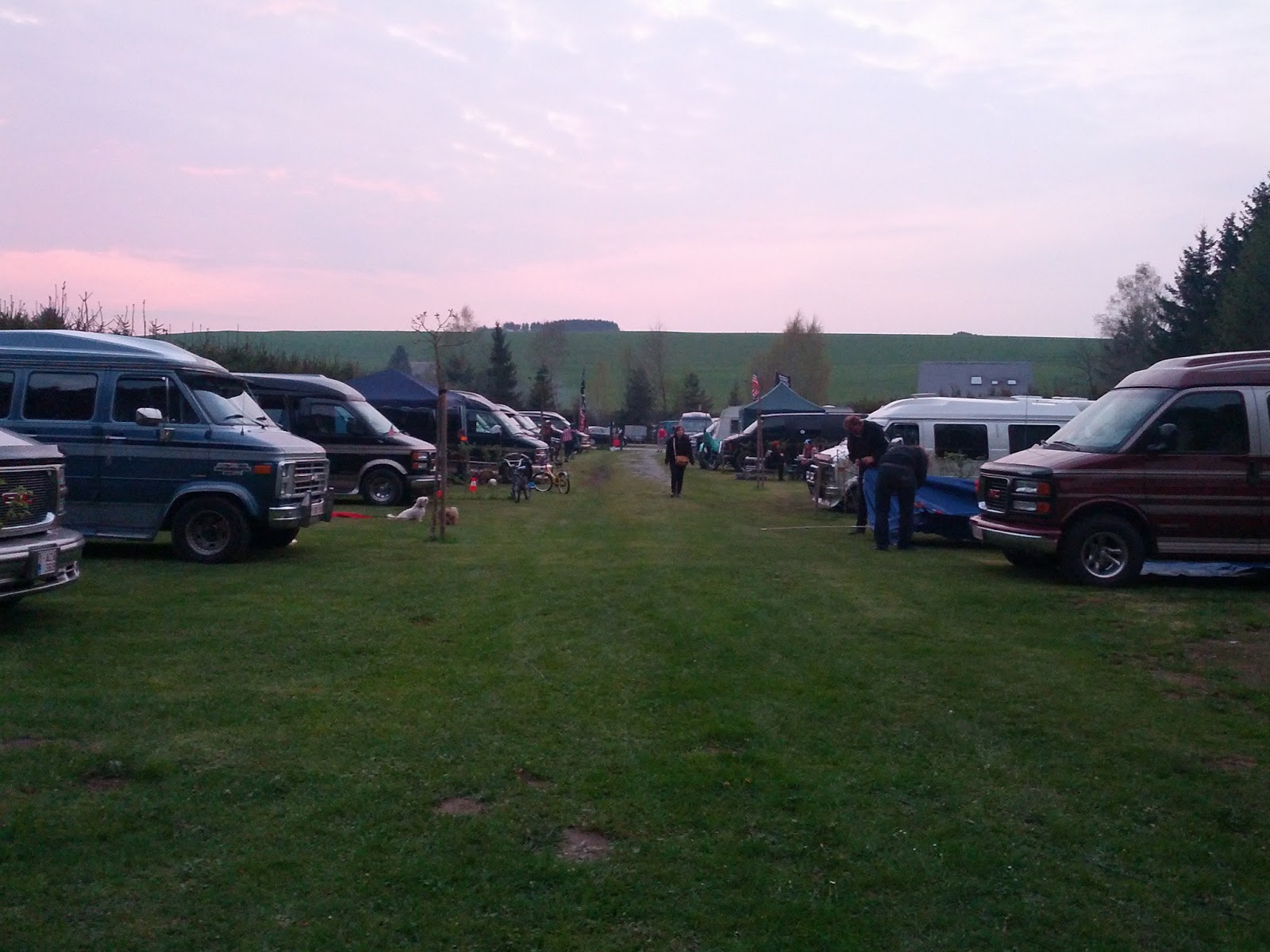 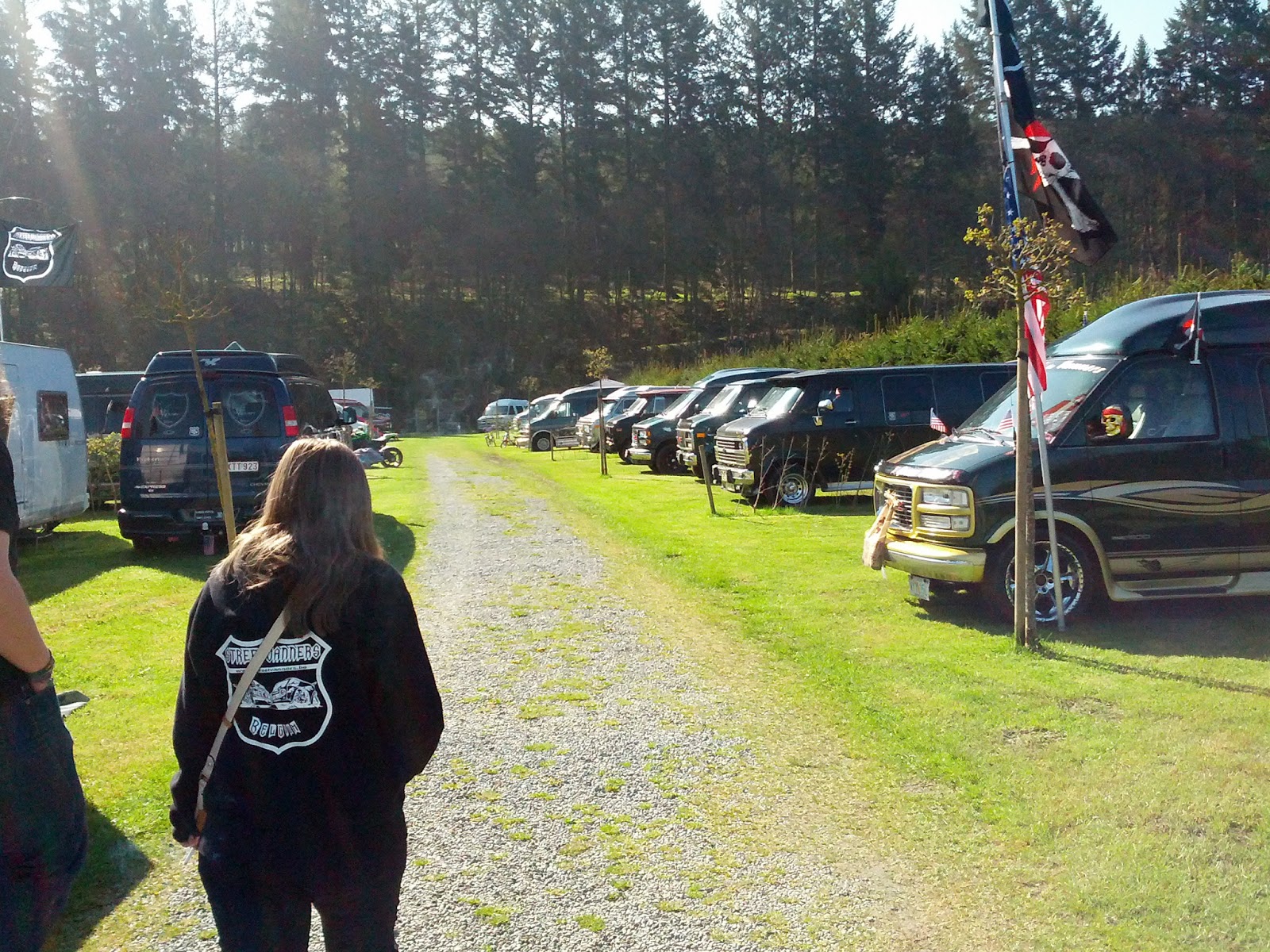 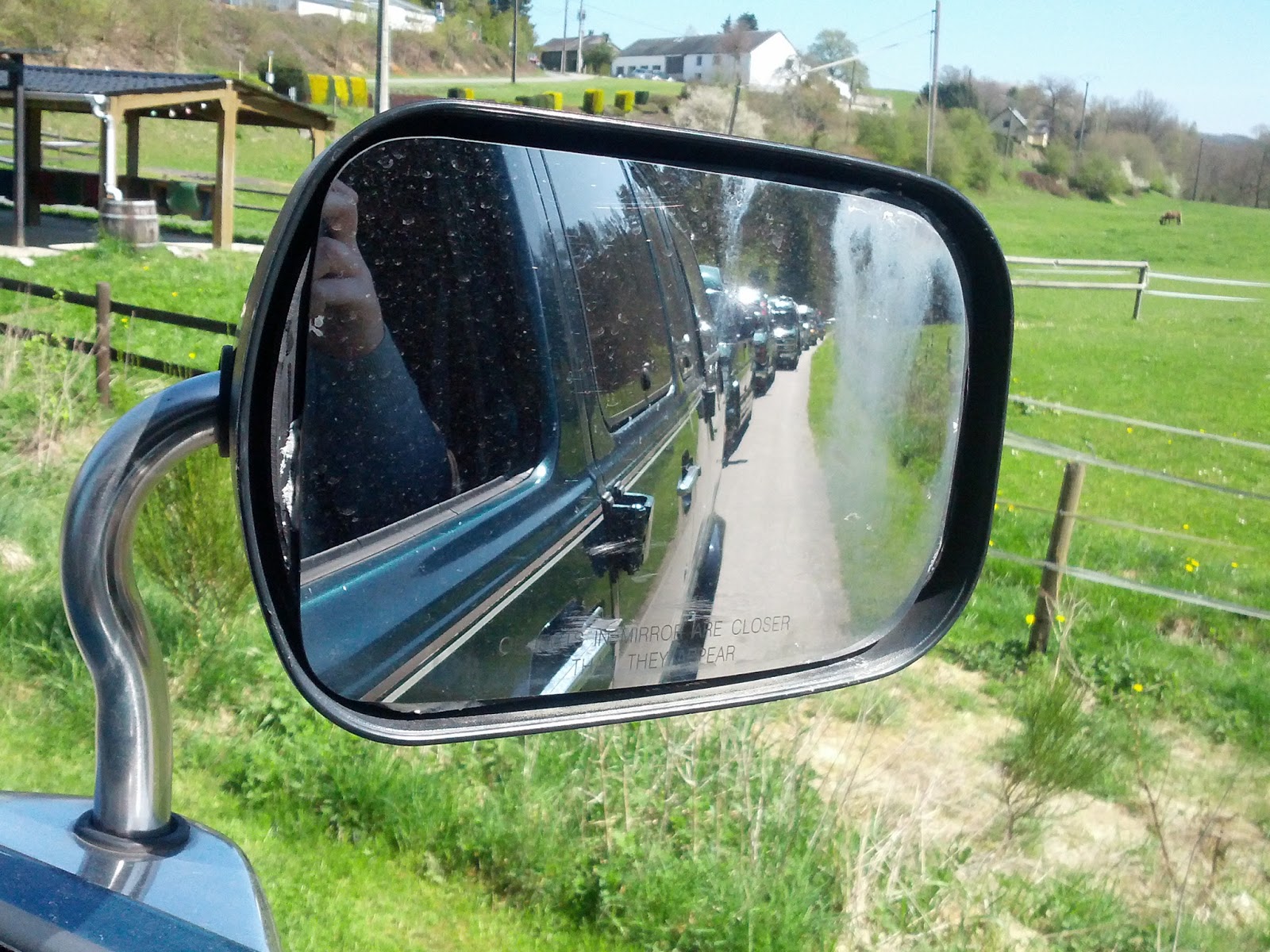 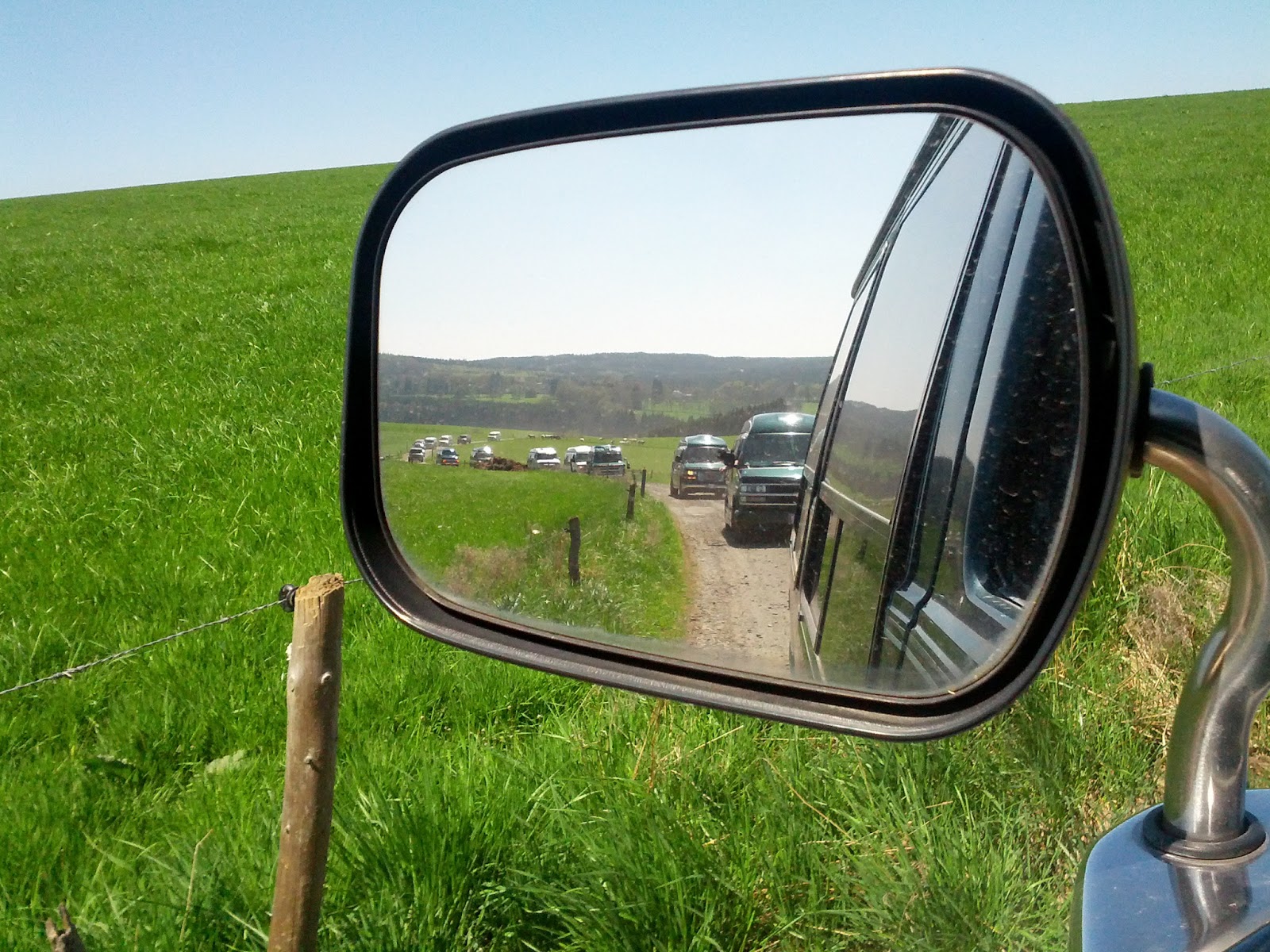 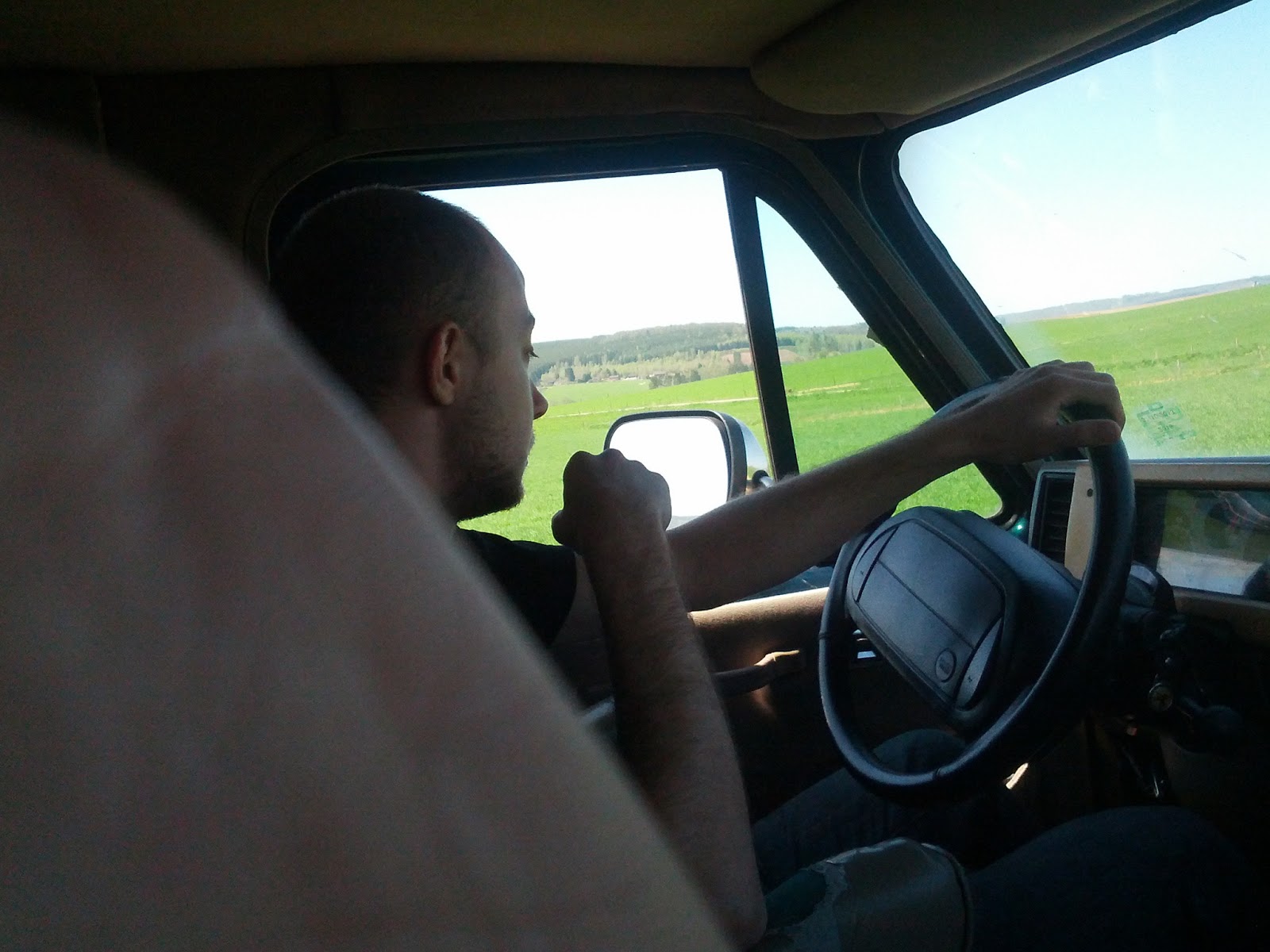 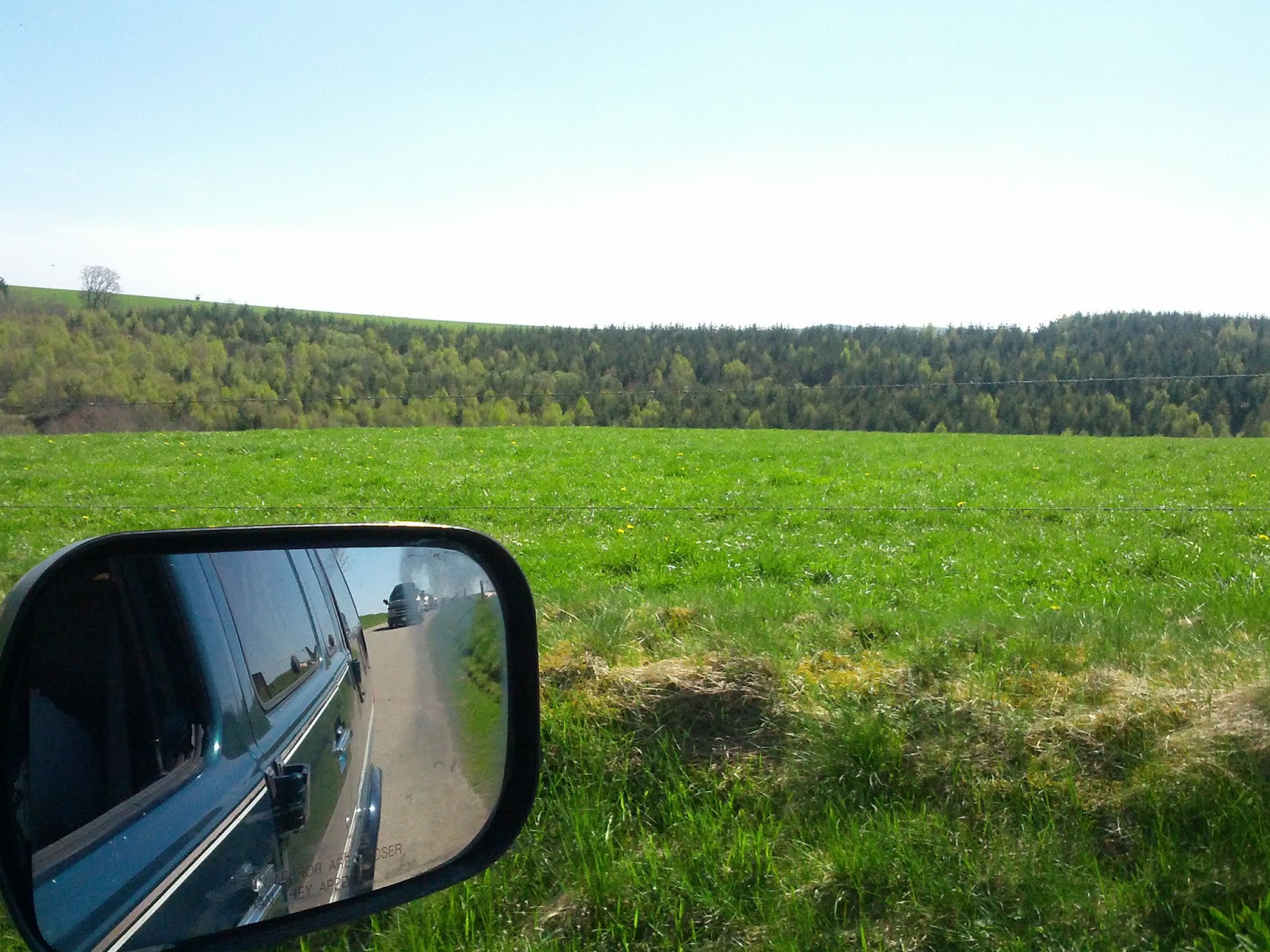 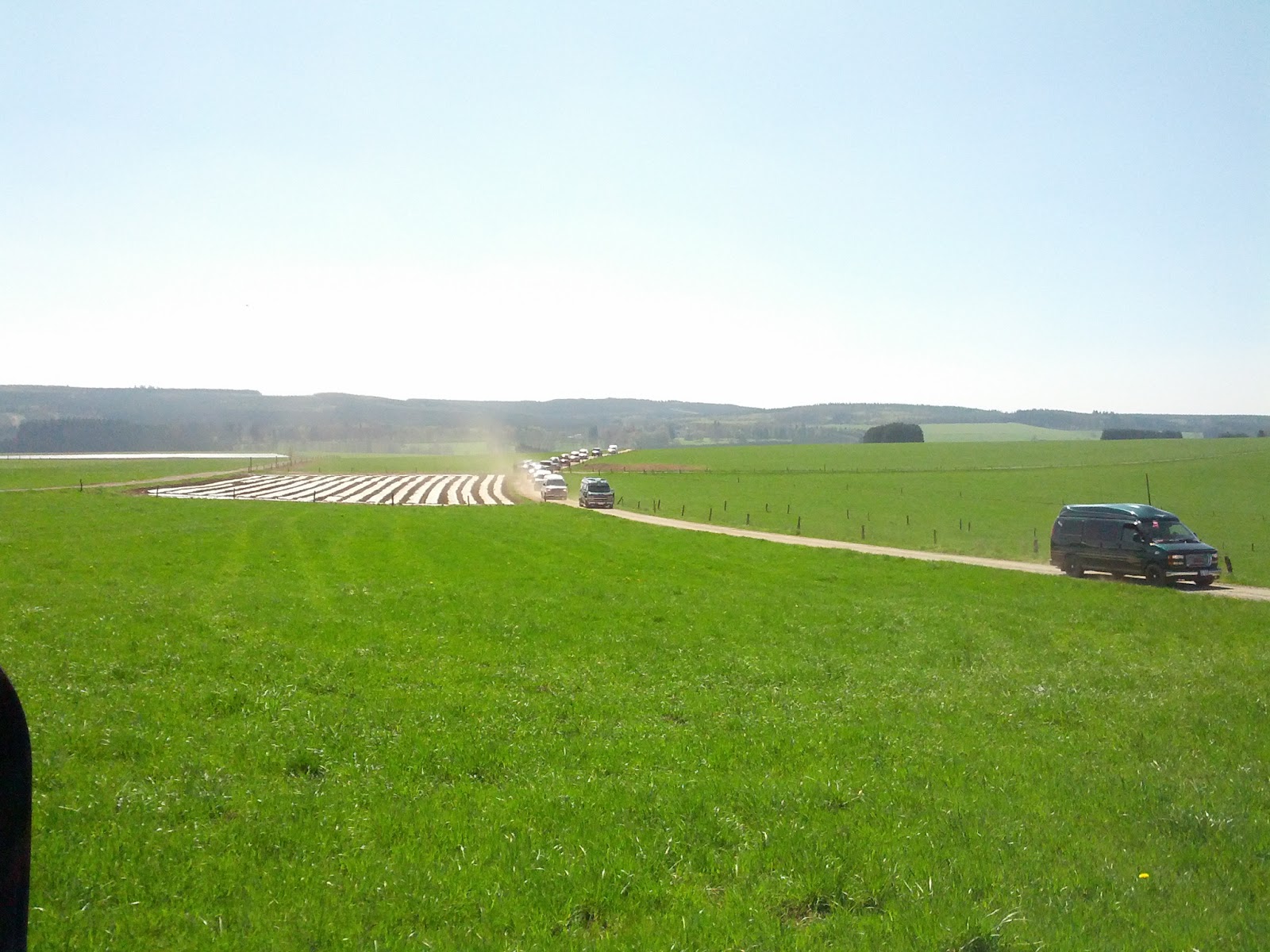 By the way, if you want to check out the website there you go: http://www.streetvanners.be/
Gepost door Kristof op 12:00 Geen opmerkingen:


It ain't easy to find yourself something reflecting the size of your testicles on the road here in Belgium, and even if you do, the tax office eats you alive for having a car with a 5.7 liter engine with more than 200 bhp under the hood. In the case of having just 'a car' with such specs, the road tax is huge, and the tax for letting you have the car gets quickly over 2000 euro's. Some versions of the GM full size van (as is this one and the G20/G30 Chevy van) are transformed into a motor home here in Belgium, putting the tax collectors out of the story (with the exception of the annual 132 € road tax).

As I said there is some work to be done on the van. The outside is pretty shitty, the brakes are also pretty shitty, not to mention my AC. One of the previous owners had an accident and the passenger side got pretty damaged.

Nothing too big. I'm pretty sure polish mechanics will fix this quite nice.
Gepost door Kristof op 12:00 Geen opmerkingen: